This is a simple and easy-to-make keto cheesecake crust recipe that can also work with a decadent treat or decadent dessert other than cheesecakes! 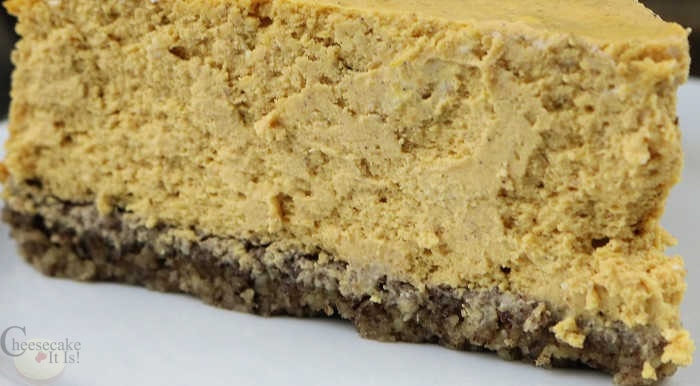 That means it’s using ketones for energy instead of glucose. And ketones have a very low blood-sugar effect on the human body.

This means you will not experience cravings for sweets (meaning no sweet tooth cravings) and other carbohydrates as you do when you are on a standard low-carb diet.

However, that does not mean you still can’t enjoy the flavor of a sweet treat or two now and then.

While you could just eat a slice of low-carb crustless cheesecake, let’s face it, we all love that crunch of a yummy buttery crust. With this crust, you can enjoy a slice and stick to your low carb diet.

Do you have a favorite or best Keto cheesecake that you like to make that you will be using this crust for? We use it now when we make our Orange Keto Cheesecake or our Keto Pumpkin Cheesecake.

Benefits Of A Keto Cheesecake Crust:

The graham cracker crust of a traditional cheesecake is normally really high in crabs. But by using a keto cheesecake crust you can cut that way down.

There is an enormous amount of controversy surrounding ketogenic diets and whether or not they can be effective in losing weight.

However, the fat reserves are converted into ketone bodies which are then used as fuel by the brain and other organs.

The keto diet is a popular way to lose weight. Several studies have also shown that the keto diet can lead to lower blood sugar levels and ketosis.

While the keto diet has been proven to be effective in weight loss, its long-term effects have not been studied.

Not only is this best cheesecake crust low carb it is also gluten-free as well!

We made this great recipe using pecans as our nut of choice. However, if you can not or do not eat pecans you can make it with other nuts as well.

The only important thing you need to keep in mind is the carb count of the nuts as they are not all the same. Some nuts are much higher in carbs than others. Pecans are one of the lowest so that is why we use those.

Other lower carb nut options would be,

While I know many keto diets call for almonds in their recipes, they are actually the higher carb count on this list of nuts. So this recipe will give you lower carbs than a normal almond flour crust.

To give you an idea of how different they are here is a comparison.

Whereas 1 oz of Almonds has:

So you can use what works best for you and just know that if you use other nuts your carb count may be slightly higher.

Is This A No-Bake or Baked Crust?

The best part about this crust is it can be either!!

If you are making a no-bake cheesecake this crust can be made as-is and the cheesecake batter poured right over it and then chilled.

However, if you are making a baked cheesecake or even a pie, you can make this crust and it can be baked right along with your pie or cheesecake.

What Is The Carb Count For This Crust?

We added all the ingredients up by hand to get this figure so it can be slightly off but is pretty close.

For the entire cheesecake crust, this is what is in it.

This crust is made to serve 8 good size individual slices. So if you take and divide those numbers by 8, this is what you get per serving.

To get the net carbs per serving you would subtract the fiber from the carbs. So this would be,

Keep in mind that if you serve smaller pieces then you get more servings per recipe and the counts will be lower per serving.

If you serve larger pieces say you only get 6 servings from this, then the counts go up per serving.

Is This Keto Crust Gluten-Free?

It sure is! That is another versatile thing about using this keto cheesecake crust recipe. It is a great dessert option for those who have to avoid gluten as well.

So it makes for a nice addition to any special occasions. It is low carb, high fat, and gluten-free!

Much like a regular cheesecake crust this keto cheesecake crust recipe only uses a handful of ingredients to make it. If you are following the Keto diet then chances are you may already have these items in your kitchen.

How To Make This Crust:

Start by grinding the nuts into a powder. You can do this with a food processor or better yet a coffee grinder.

Then in a large bowl blend the sweetener and oat fiber into the nut powder. Make sure it is blended really well. I just blend with a fork as an electric mixer tends to through it everywhere.

Slowly drizzle the melted butter over the mixture. Then mix really well again.

While you don’t have to use parchment paper to line the pan you can if you want. It just makes it a little easier to slide out of the pan.

Dump the crust mixture into an ungreased 7-inch springform pan (or whatever baking pan you are using for your dessert) and press it down. You want to press the mixture really well until it forms a nice tight crust base on the bottom of the pan.

For best results only press this into the bottom of the pan and not on the sides of the inside of the pan.

Then simply cover the pan with plastic wrap and pop in the fridge until you are ready to pour your keto cheesecake recipe (or another dessert mix) over the crust.

Can You Use This Crust With Other Desserts?

You sure can! Not only is this my favorite recipe for low-carb Keto cheesecake crust, but it also works really well for other dessert low carb recipes as well.

As we said before this crust works both as baked and no-bake.

That means you can use it to make all kinds of low-carb and gluten-free treats.

Some of the other ways you can use this crust are;

While I have pies listed above, it would not be like a normal pie crust but still gets the job done.

Can This Crust Be Frozen?

This crust can be frozen, however, it really works best if it is frozen with the cheesecake or other dessert already over it.

While it can be frozen without adding the cheesecake you just need to take a few extra steps when you are ready to use it. Meaning that you will need to allow it to thaw to almost room temperature before you add the cheesecake.

You will also need to lightly blot off any extra moister after it has thawed with a paper towel before you add the cheesecake.

If frozen with the creamy cheesecake filling it can all be thawed at the same time and there is no need to blot with a paper towel. 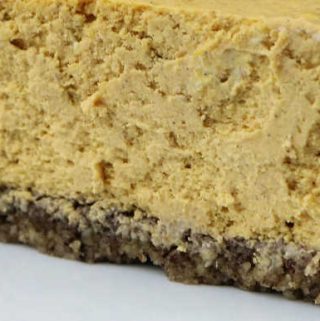