If you are eating low carb or keto you can still enjoy sweet treats! This Keto Pumpkin Cheesecake Recipe With Pecan Crust will make you think you are cheating on your diet. 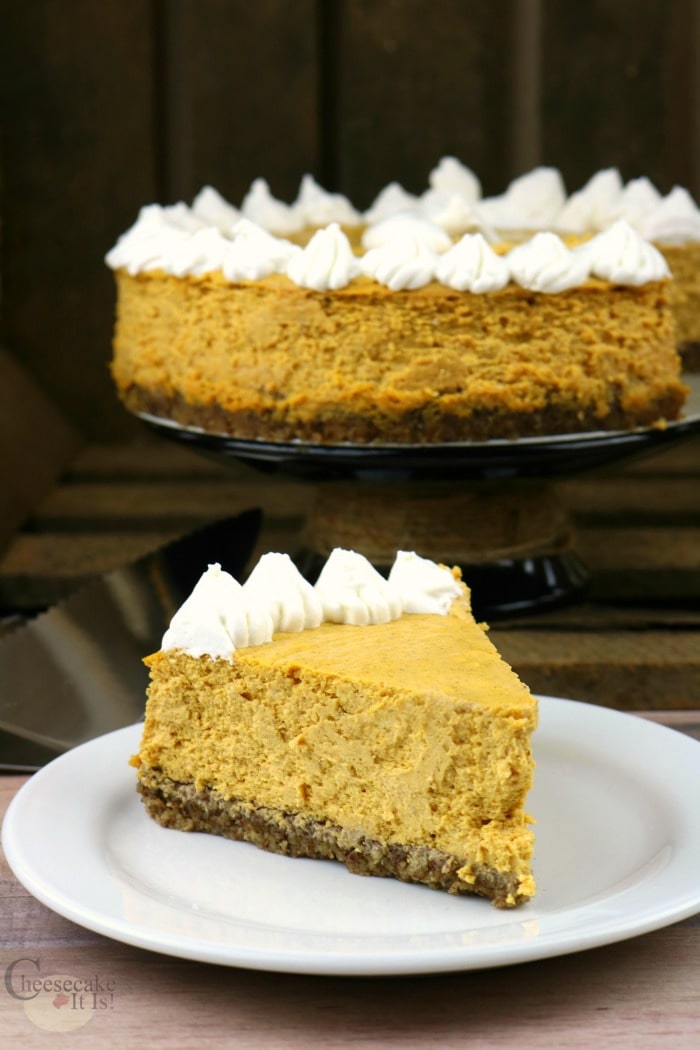 One of the worst things I hate about following a diet is having to give up things I love. But with recipes like this Keto Pumpkin Cheesecake, you don’t have to do that even if you are following a low carb diet.

I made the crust with pecans, but if you do not like those, you could swap it for something else like almonds.

To bake this I used the Cheesecake Water Bath Baking method. You could just bake in the oven without doing this however, I find this method works best to not have those hard crusty edges.

How To Make This Keto Cheesecake:

Grease your cheesecake pan well. I used a push pan to make this cheesecake.

Next, in a food processor chop the nuts really fine. It should almost look like a thick flour texture. Then add in the melted butter and Splenda and give it a good mix.

Then pack the nut mixture into the bottom of the pan. I just do the bottom and don’t worry about doing the sides. After you have it packed well and pretty evenly, set it aside.

In a stand mixer or food processor beat the cream cheese until slightly smooth. Then add in the vanilla, pumpkin pie spice, pumpkin puree, and eggs and give it a mix.

The last thing you need to add in is the Splenda and mix again.

Pour the cheesecake mixture over the crust. The follow the steps to do  Cheesecake Water Bath Baking. When you have the pan and water ready, pop it in the center of the oven and bake for an hour and ten minutes.

Then turn off the oven and leave the oven door closed and allow the cheesecake to sit in the oven for another 20 minutes.

Remove from the oven and allow it to cool so that you can touch the pan with your hands. When it has cooled that much you can remove the outer ring of the pan.

Top with some whipped topping and serve. If eating Keto, I like making my own whipped cream from heavy whipping cream and just a touch of Splenda. 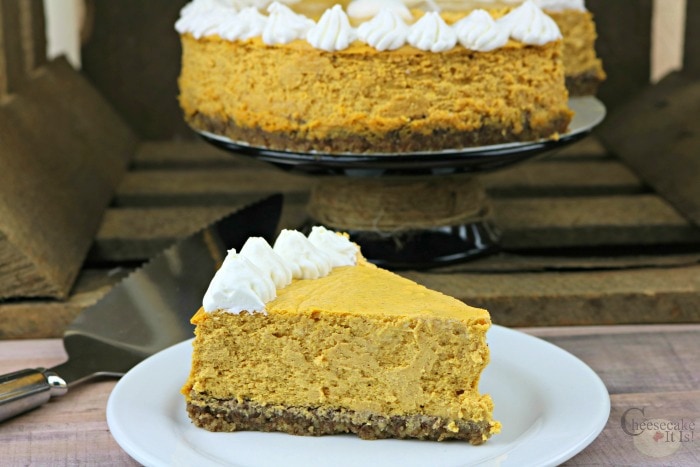 If you are looking for other low carb keto recipes, here are a few to try. 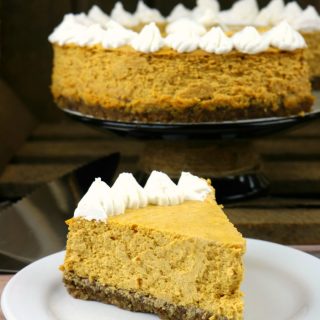 Can You Use Other Nuts For The Keto Cheesecake Crust?

Yes, you can! While we often use pecans to make our crusts for keto recipes, you could also make an almond flour crust or coconut flour crust.

Or you can even chop up walnuts and use them in place of the pecans as well. Not only does using nuts as the crust make it low carb, but it also makes it a gluten-free crust.

How To Store This Low Carb Pumpkin Cheesecake Recipe

All cheesecakes whether regular cheesecake, no-bake, or keto should always be stored in the fridge or frozen. For best results allow it to cool to room temperature, then cover in plastic wrap or place in an airtight container before putting it in the fridge.

If you want to freeze cheesecake, it works best if you slice it first and place a piece of parchment paper between the slices before freezing.

How Many Crabs Are In This Recipe?

When you are following the keto diet whether it is for the first time or you have been on it a while, you always want to know the carb count of a recipe.

As I noted at the end of the recipe card when served in slices of 8 it works out to be about 375 calories, 37g fat, and 13 grams of net carbs per serving.

Do You Have To Use Fresh or Canned Pumpkin Puree?

This really is an easy recipe! Which makes it a perfect dessert for the fall season. One of the things I like best about pumpkin desserts is most can be made from fresh puree you make yourself from a pumpkin or you can use store-bought canned puree.

However, if using canned, just be sure to watch out when you are buying to make sure it is just pumpkin puree and not pumpkin pie filling. The pumpkin filling already has pumpkin spice, sugar, and things added to it.

While the spices are fine the sugar will not work with this pumpkin keto cheesecake as we need to use a low carb sweetener.

Note: The crust recipe we have included in this post is just fine to use. However, we have since come up with an even better crust. Check out The Best Low Carb Keto Cheesecake Crust Recipe!