Do I have your mouth watering just thinking about that rich and creamy chocolate and the buttery, nutty coconut topping?? Well, you are in luck! I am going to share my homemade recipe for german chocolate cheesecake with you!

While this is pretty much a basic chocolate cheesecake recipe finished off with homemade german frosting, if you are in a pinch for time, you can use the canned frosting. I do have to warn you that it will work, but it is not as nearly as good as making the real thing. 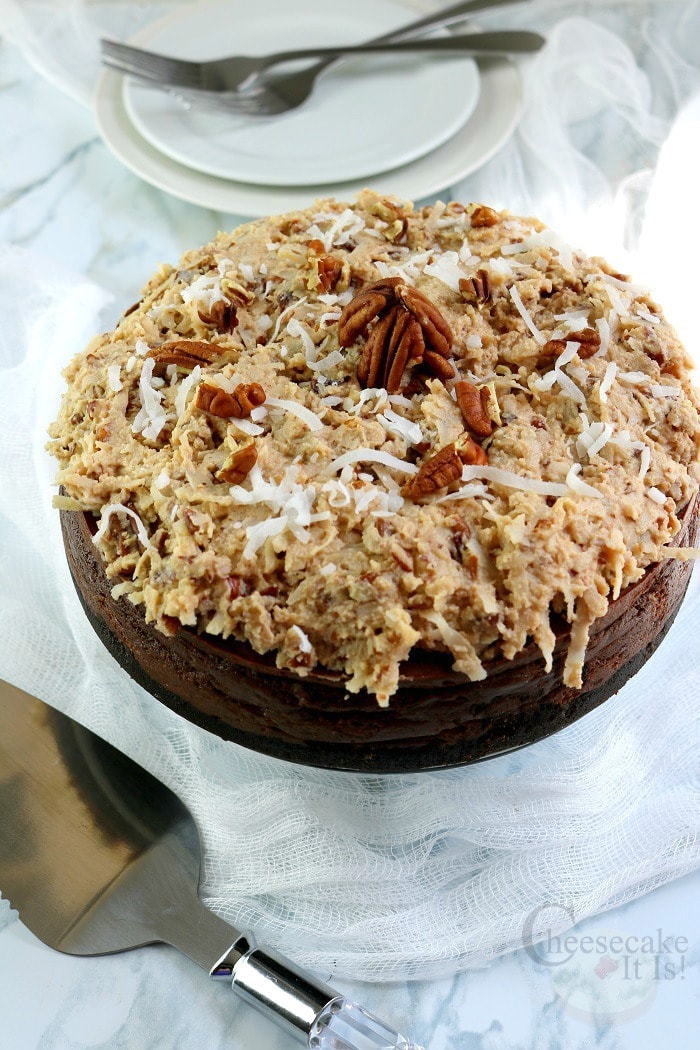 Not only is this just a chocolate cheesecake, but it also has a chocolate crust as well. You can make with all real sugar, if you are looking to cut the sugar content, you can replace with Splenda and it works just as well.

This could be made in any deeper cheesecake pan however, I made mine in my go-to push pan.

How To Make This Cheesecake:

In a food processor, crush the chocolate cookies. Then add the melted butter and mix until blended. In a greased 7″x3″ cheesecake pan, press the crumb mixture onto the bottom of the pan and place in the freezer.

Next, in a double boiler on the stove, add one cup water to the bottom pan and bring to boil and turn off. Then add the chocolate chips and melt. Then set aside.

Now in the food processor beat cream cheese until it is smooth. Next add the sweetener, cocoa powder, vanilla, and eggs and mix again. Be sure to scrape the sides so that it all gets mixed in.

After that is mixed, slowly add small amounts of the melted chocolate mixture in at a time and stir it in.

Place the whole thing in the preheated oven and bake for an hour and ten minutes. Then turn the oven off and leave the door closed. Allow resting in the oven for another 20 minutes.

Then remove from oven and allow to cool on the counter before place in the fridge.

How To Make The Frosting:

Over medium heat on the stove, mix the egg, milk, and sweetener. Stir constantly, until the mixture thickens. It takes about 10 to 12 minutes.

Then remove from heat. Then add in the vanilla and mix it in. Next, add in the coconut and the nuts. Mix until fully blended.

When you are ready, frost the top of the cooled cheesecake and store in the fridge.

If you have any leftover frosting, be sure to store it in the fridge for up to 4 days. 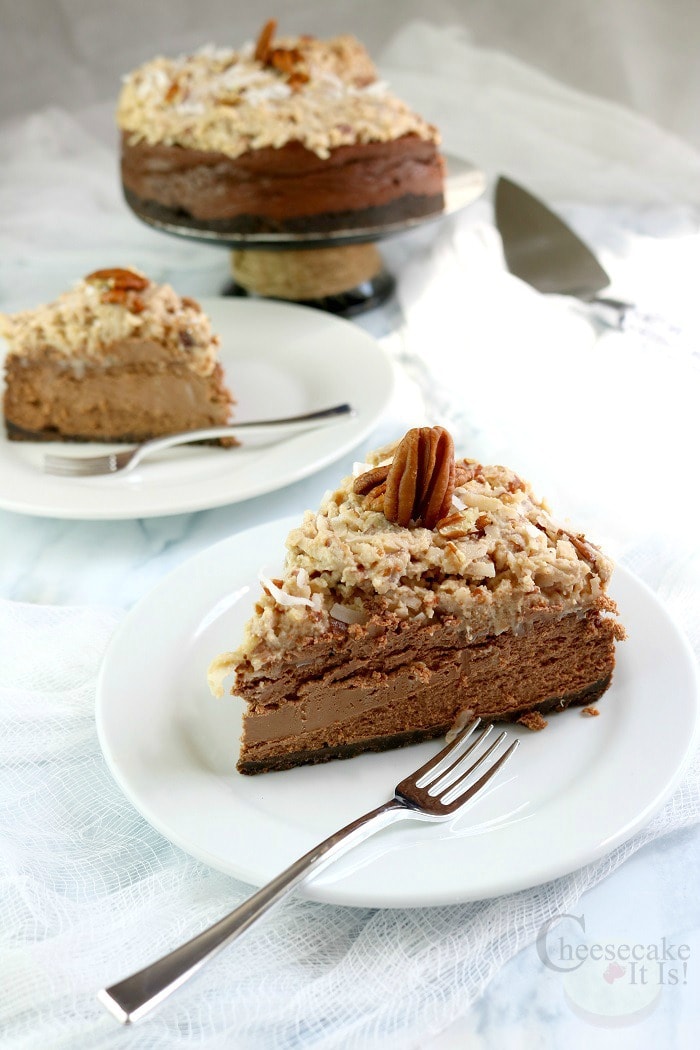 Here are a few other oven-baked cheesecakes you may enjoy. 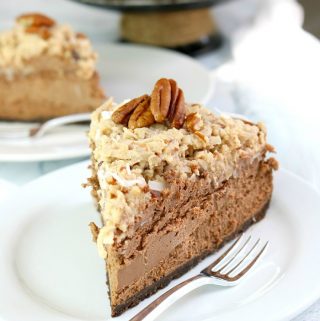 Nothing like the taste of a freshly made german chocolate cake with REAL icing! Well, that is unless it is a german chocolate cheesecake, then that one takes the cake!
Print Recipe Pin Recipe
Prep Time 15 mins
Cook Time 1 hr 10 mins
Oven Resting Time 20 mins
Total Time 1 hr 45 mins
Course Dessert
Cuisine American
Servings 8